Crafting the finest seasonings and dry rubs since 2016. Spice Science seasonings and rubs add dimension and greatly enhance the flavor of all your dishes. All our ingredients are hand selected for freshness and quality. 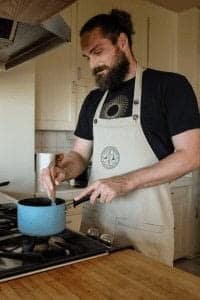 Formally, Spice Science was founded in 2016. The year prior however, was when the idea, the blend, and the science actually started. That year I worked from home, which allowed me to actually plan, prep, and cook three meals a day.

My name is Cody Ruch, I am a musician with a passion for cooking. While working from home in 2015, daily I experimented with different spices and blends. Trying to figure out exactly how they affected flavor.

Eventually, I realized I was using a similar blend of spices to prepare and cook just about everything. This is when I decided to make a large jar of it in order to speed up the prep for each meal.

On one occasion, I was preparing a steak for myself and a friend who dropped by for dinner. I used my normal spice mix with a few new additions. We both took a bite, turned to each other and stared disbelief, both exclaiming out loud,

“This is the best steak I’ve ever had!”

My friend asked if he could take some seasonings home. I thought it would be a good idea to share my discovery with a few other friends as well. Soon everyone who tasted the new blend were back looking for more.

This was around the holidays season so I figured, seasonings and rubs would make a great gift!
I made a large batch, packaged it, and handed it out to all my friends and family.

Everyone loved it so much that by January I had strangers asking me how they could get more of this delicious spice someone had shared with them. Even my friends were asking to purchase more.

This is when Spice Science was born, to share my spices and blends easily with all of you!

Spice Science takes a scientific approach to flavor. I love and encourage experimenting with recipes, finding the subtle differences between small amounts of change, and attempting to re-create them with ease. By researching each ingredient fully, one can have a better understanding of how to and why to use them.