I have an entirely irrational love of David Lynch’s 1984 science fiction epic, Dune. (This is almost unrelated to my entirely rational and well thought out love of Frank Herbert’s Dune books. These two things should never be confused.) Maybe I saw it at just the right age to find Sting, black leather, and redheads seductive. Maybe it was the first big budget science fiction movie I’d seen where a woman who was just there to be a decorative prize actually stepped up and told the ‘verse how much her role in life sucked. Maybe giant sandworms made me think of David Bowie’s tights in Labyrinth. Regardless of the causes, something about the Lynch version made an indelible mark on my brain. 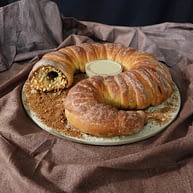 Fast forward a few years. I’m now a grownup with a kitchen of my very own and some lovely books to prove I’m officially Good At Food. The time has come for me to pay homage to the Great Maker in the way of my people – by sacrificing millions of lives to create an homage worthy of his visage. A tablespoon of yeast should cover it.

Since you honor my sietch with your visit, I will share the secrets of creating a proud, impressive, spice-scented effigy of the Great Maker of Arrakis.

So many things went wrong with my first sandworm that the Fremen threw me out of the sietch. Look at this monstrosity. 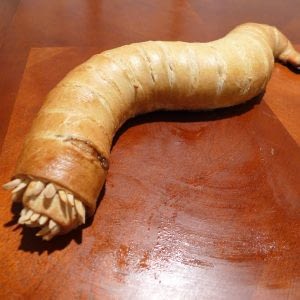 No. Just no. That looks like it should be stalking a desert town in Tremors.

I spent a little time in the city serving those soft, water-fat lords from Caladan. When I couldn’t take that anymore, I wandered the desert in search of a vision. Shai Hulud himself came to me and spoke with his spice scented breath, giving me visions of proper tributes to him both in bread for the masses and pie for those cursed with the affliction of Celiac. 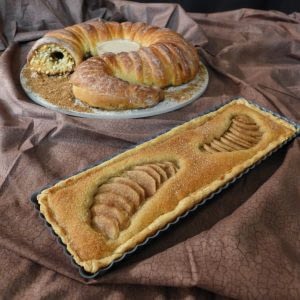 First, mix the yeast and warm water. Let the yeast blossom like a sand storm in the desert. After ten minutes, add the brown sugar, vanilla, cinnamon, sietch spice, salt, and eggs. Whisk it all together until your bowl starts to smell like stale spice wine.

This part may seem dangerous, but if you own a stand mixer, set it to 2 and let it go for six or seven minutes. Try to break the rhythmic thumping by pausing at random times to scrape the sides. Technically, it’s far safer to mix everything up by hand then knead it for a good 10 minutes at a random, uneven pace, but practically, using the mixer is a lot easier.

Form the spice dough into a ball. Put it in a well greased bowl, cover it with a clean kitchen towel, and let it rise for an hour, or until the size doubles.

When you come back, punch it like a fat Harkonen.

Spread some extra flour on a clean surface and roll the dough out into a large rectangle.

Paint the dough with your melted butter, leaving at least 1 inch of clear space around the edges.

The last time I made a sandworm, I tried neatly pressing the almonds into a straight line of teeth. It wasn’t awful, but once purified by the heat of the desert, that worm looked more like it should be terrorizing a town in Tremors instead of riding majestically across the desert. The problem was when the dough rose, it pushed all the teeth outwards and upwards.

I learned from that mistake. This time, I spiked the first inch or so of my sandworm’s mouth with almonds pointing up, but angled ever so slightly outwards.

Evenly anoint his back with your cinnamon, sietch spice, and sugar. You can pre-mix them if you’d like, or you can just lightly massage it all into the butter using your fingertips.

If you like raisins, toss some on top. I usually make my sandworms half and half, with pure spice up front and some raisins in the tail end.

In addition, instead of rolling the worm tight, make sure yours is loose, almost floppy. If you roll a shaped bread too tight, when it rises, it’ll push outwards, malforming the shape. Give it room to grow.

Once I had a fat, toothy sandworm, I put it on a pizza tray covered in parchment paper, gave the body some slithery kinks, sliced ridges into its back, and let it grow. I also balled some aluminum foil into a cone and kept that in the Great Maker’s mouth so he’d have an intimidatingly toothy gape after being baked.

All that was left to do was whisk a teaspoon of vanilla with an egg (the vanilla makes your kitchen smell amazing), paint the Great Maker’s back, and send him into the desert to bake it at 350F for 25 minutes.

As soon as he emerged from the oven, I anointed his flesh in glaze so the flavor could penetrate the outer skin.

Behold! The sleeper has awakened!

After your friends take their Pintrest shots, treat your effigy like a baby worm you’re melting into the Water of Life. Wait, don’t. Soaking it in a puddle won’t help the flavor. Instead, cut it into rings and drizzle a little more glaze on each slice.

If only fat, sugar, and carbs alone could extend life and broaden the mind without an infusion of the spice melange!